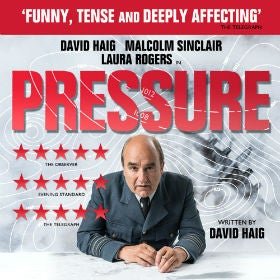 Make your way to the Ambassadors theatre between 6th June and 1st September for a play you won't forget in a hurry. It's the marvellous Pressure, written by and starring the excellent David Haig. It actually transfers on the 74th anniversary of the D-Day landings, a poignant reminder of the 350,000 lives that were at stake, and all because of one very special weather forecast. Roll back time to 1944, when the Normandy landings and allied invasion of Normandy in Operation Overlord, Codenamed Operation Neptune, was about to take place. It was the biggest seaborne invasion in history, and unless the weather was exactly right it was doomed to fail.

The Telegraph calls Pressure, "Funny, tense and deeply affecting". The Evening Standard and Observer gave it a five star review, and the Daily Mail says it's “thrilling”. The Olivier Award-winning David Haig plays the real-life Scottish meteorologist, Group Captain James Stagg, whose job it was to advise the allies about the weather. Pressure examines the tense 72 hours before Operation Overlord launched, and is set inside the Allied Expeditionary Force's HQ. Expect a story that amuses, delights and informs, all set during a period when Britain and the allied forces were at a knife edge, a time when the war could easily have been lost. You're going to love it.