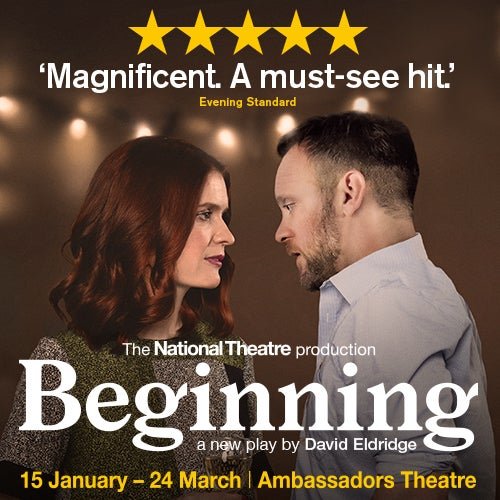 After its opening production run even finished at the National Theatre, Beginning had announced its West End transfer to the Ambassadors Theatre. It opens across the river from 15 January 2018, with Justine Mitchell and Sam Troughton reprising their roles as Laura and Danny respectively. Director Polly Findlay joins the actors for David Eldridge’s two-hander about tenderness and vulnerability.

It’s the end of Laura’s party and David is the only one left behind. Both are in a mess, so what’s one more drink for the road? In those first few hours, both characters have to decide whether it’s safer to remain guarded, or whether to open themselves up and take a chance on a new relationship? It’s a fragile time to risk your heart and happiness, but perhaps it’s worth it this time.

Beginning will transfer to the Ambassador Theatre in the first new production there for over ten years, after Stomp closes its doors for the final time since 2007. It is currently booking for eight weeks and is selling fast, with National Theatre members getting in on the priority booking action first.